Look at this headline from MLive on Friday:

It is shameful that the Republican-controlled Senate is going to hold hearings on gun confiscation orders before ever giving Constitutional Carry a hearing, let alone a vote.

Give Senator Shirkey’s Office a call at (517) 373-5932 and tell him that you oppose giving hearings to “Red Flag” gun confiscation orders!

After calling, please sign your Stop “Red Flag” gun confiscation laws petition to help us sound a loud-and-clear message to your lawmakers that you oppose this radical scheme.

I’m hoping to bury the Senate in anti-Red Flag petitions just as we did back in 2019.

All because an angry family member, nosy neighbor, or abusive ex claimed you might be a threat.

No due process, the opportunity to face your accuser, or any crime even being committed.

Just your legally-owned firearms getting seized on a whim, forcing you into an expensive court battle with absolutely no guarantee you’ll ever get them back.

But that’s just what the gun grabbers want — to take the guns and never give them back.

And Senator Shirkey is giving the anti-gun Left the hearing they’ve wanted to push this garbage in Lansing.

After all, while pro-gun patriots were rallying outside the Capitol at the 2019 Second Amendment March, that same day Shirkey was making promises to “Red Flag” bill sponsor Democrat State Senator Rosemary Bayer to give her bills a hearing.

This is just the latest example of a Michigan Republican currying favor with anti-gun Democrats instead of working to restore your Second Amendment rights.

And it isn’t even Shirkey’s first betrayal…

After all, he joined the anti-gun bandwagon that ultimately led to the Michigan Capitol Commission acting unilaterally (and unconstitutionally) to ban lawful carry in Michigan’s State Capitol building.

Some will say, even on our side, that it is only a hearing and it doesn’t matter that much.

Here’s the problem with that. 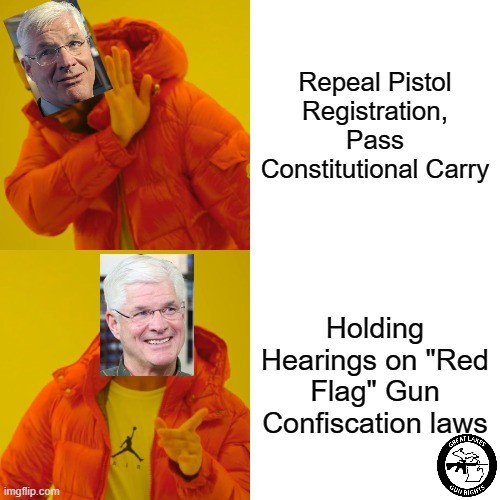 But he’s wheeling-and-dealing with your gun rights for some cutesy political ploy by giving the Democrats this hearing on “Red Flag.”

All this serves to do is gin up the anti-gun Left while demoralizing gun rights activists in Michigan.

This is just yet another example of Republicans thinking that they can abuse gun owners and pay no political price for it.

And that’s where it is up to us to prove Shirkey, and others like him, wrong.

Don’t let this demoralize you.

Instead use it as an opportunity to hold our political leaders’ feet to the fire and make it clear to them that if they betray gun owners it’ll cost them politically.

Every State Representative and Senator who is running for re-election has to face the voters in new districts.

And there are piles of new candidates announcing runs for office each and every week.

The political establishment is very sensitive to political pressure right now, so it’s crucial that we take advantage of this moment.

When Shirkey’s “Red Flag’ hearing finally happens, we must bury the committee and Senator Shirkey with opposition to “Red Flag” laws as well as Republicans for being the ones to hold these hearings in the first place.

Help me do that by signing your Stop “Red Flag” gun confiscation laws petition and then forwarding this to all of your pro-gun family and friends.

After you sign, please chip in $30 or even $10 to help us pour on the pressure on to the Senate so that they don’t forget how outraged gun owners were at them playing politics with their gun rights.

I’ve got big plans in the weeks ahead to make the Senate feel the heat, so stay tuned for more opportunities to help out.