You’re more than likely in a government database if you own a pistol in Michigan.

Michigan is one of only a handful of states requiring a government permission slip to purchase a pistol, serving as a de facto pistol registration scheme.

And law-abiding gun owners in Michigan have lived under this burdensome violation of not only our gun rights, but also our privacy rights for more than a century. 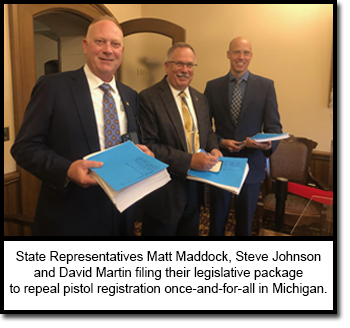 On top of that, there are already 15 additional co-sponsors for the House legislative package.

So I’m counting on you to sign your petition to repeal Michigan’s pistol registration today.

Your signed petition sends a clear message to lawmakers that now is the time to act.

As it stands now, the system is antiquated and convoluted with Michigan residents and law enforcement officials alike not truly understanding how to fully comply with the law.

The complexity creates a layer of bureaucracy on pistol purchases that leaves gun owners and government officials bewildered as to how the system is supposed to work and how it is even being enforced currently.

This confusion is making criminals of unknown magnitudes across the state.

Our laws should be simple and straight forward to understand — for both citizens and government officials.

Neither should be unnecessarily burdened with a mandate shown to have little-to-no effect on crime deterrence in 100 years of its history.

Instead, pistol registration has a nefarious past of being manipulated to deny gun ownership to countless law-abiding Michiganders.

These bill packages (HB 5312-5314 and SB 646-648) do NOT change who can legally own a pistol in Michigan. They simply repeal the pistol purchase permit and eliminate the current registration system.

Persons currently unable to lawfully obtain a permit to purchase or legally own a pistol under current law would not be able to legally do so under these bills.

It simply eliminates the need for government approval to engage in the process of purchasing a pistol.

That’s why I’m counting on you to sign your petition to Repeal Pistol Registration in Michigan.

The grassroots activism of pro-gun Michiganders like you will be the key to finally repealing this gun registration scheme once and for all.

Similar legislation passed through the Michigan House of Representatives with bipartisan support in 2012 by a vote of 74-36 as House Bill 5225.

With Great Lakes Gun Rights’ hard-nosed tactics and the pressure from dedicated members pushing for this bill package to pass, lawmakers in Lansing can’t ignore us.

And pushing for a recorded vote now tells us where lawmakers stand on gun rights, regardless of an eventual gubernatorial veto.

With Gov. Whitmer already under scrutiny for unilateral control and blatant hypocrisy during the COVID-19 outbreak, just making her sweat over the possibility of it getting to her desk would be a victory in itself.

That’s  why GLGR is contacting pro-gun Michiganders across the state to mobilize a grassroots army to end pistol registration.

Thank you for your continued vigilance and support.