I just got home from Lansing and I wanted to provide you a quick update on what is happening in the fight for your gun rights at the Michigan Capitol.

I drove there this morning to testify on House Bill 4003, sponsored by State Rep. Matt Hall (R-HD 63), which is a modest proposal that simply makes it so that a CPL holder doesn’t accidentally become a felon for carrying with an expired permit. 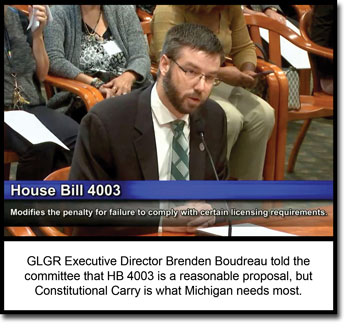 The fact is, when it comes to comes to the right to keep and bear and arms, Michigan is out of step with much of the nation.

While there are now 21 states that require no permit to carry either openly or concealed, Michigan has one of the most expensive permits to obtain and maintain in the country.

As if that isn’t bad enough, Michigan law carries a harsh five-year felony conviction for carrying a concealed pistol without a permit.

Surprisingly, California is more forgiving towards carry without a permit than Michigan.

Even after going through all of the bureaucratic hoops, paying the expensive administrative fees, obtaining the required training, being fingerprinted like a common criminal, and going through a stringent background check, Michigan law gives no grace towards current CPL holders for accidentally allowing their permit to lapse by even one day.

Ultimately, the solution is to remove the permit requirement outright so that law-abiding citizens in Michigan can practice their Second Amendment rights unfettered by the draconian laws holding gun owners back at present.

In other words, Constitutional Carry. And I made that clear to the Judiciary Committee this morning.

We’re turning up the pressure on lawmakers in Lansing to bring Constitutional Carry (House Bills 4863-4868) to the House floor for a vote, and they are starting to take notice.

Even with an anti-gun Democrat in the Governor’s mansion, gun owners MUST keep pushing for Constitutional Carry and demand that a vote be held on this important legislation so that it is crystal clear who stands with the gun owners and who doesn’t.

So please keep calling and emailing your lawmakers and make it clear that you expect them to take a vote on Constitutional Carry THIS YEAR.

You can help take action in support of Constitutional Carry by clicking here.

In other news, pistol registration repeal is officially filed in both the Michigan House of Representatives and the Michigan State Senate!

This is the first time in recent history, if ever, that pistol registration repeal has been filed in both the Michigan House and Senate during the same legislative session! This is BIG news and could be a good first step towards finally repealing this draconian scheme.

Finally, just a quick reminder that the Second Amendment March is happening this Thursday from 10am to 2pm at the Michigan State Capitol in Lansing.

Great Lakes Gun Rights will be there with gear and petitions, so come find us if you’re able to come out!