The field for the Republican nomination to run against Queen Whitmer for Governor is getting crowded. 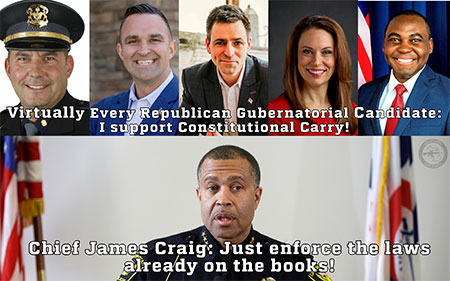 Please call his campaign at (313) 288-8854 and politely encourage him to take a bold, public stance in support of Constitutional Carry.

With Craig as the current front-runner (and establishment favorite) in the race, it’s vital gun owners know which version of Chief Craig they might be getting.

You see, during his time as Detroit Police Chief he generally supported private ownership of firearms for the city’s residents.

On top of that, he has maintained his vocal support for the Second Amendment.

However, his more recent rhetoric is more along the lines of “enforcing the gun laws on the books.”

Which is another issue.

You see, Michigan has some of the most draconian gun control laws already on the books.

Michigan is one of only a few states with a form of firearm registration through the de facto pistol registration scheme.

And Michigan has concealed carry laws that are some of the most punitive in the nation, even worse than California.

Law-abiding Michiganders can become felons for simply carrying concealed, or in a car, without a government issued permission slip.

So there is concern for gun owners if Chief Craig is talking about enforcing the laws already on the books and maintaining the gun control status quo in Lansing.

And looking into his past doesn’t make things any easier to figure out.

Craig changed his views supporting gun ownership after seeing it as a way of life in Maine, one of the safest states in the country.

But as Chief of Police in Cincinnati, Craig supported a ban on gun sales over the internet, reinstatement of the so-called “Assault Weapons” ban, and magazine capacity limits.

And he was Cincinnati Chief AFTER he was Police Chief in Portland, Maine.

So the fact remains, while we still don’t know where Craig stands on the pressing gun rights issues of the day, virtually all of his opponents are supporting Constitutional Carry.

That’s why it’s so crucial for gun owners across Michigan to call Chief Craig’s campaign at (313) 288-8854 and encourage him to take a public stance in support of Constitutional Carry.

Fellow Patriot, it’s not impossible for Craig to have changed his views since Cincinnati and become more supportive of gun rights after announcing his run for Governor.

But we can’t be sure where he stands on repealing Michigan’s draconian pistol registration scheme, or if he’ll oppose “Red Flag” Gun Confiscation laws.

And maybe it’s just a matter of time before he unveils his full position on the Second Amendment.

Until then, we can only take his previous words into account.

With how critical the 2022 election cycle is for the future of gun rights in Michigan, we must have every candidate challenging Gretchen Whitmer on record in support of Constitutional Carry.

We’re gearing up for our aggressive campaign to make sure every candidate takes a stance in support of your gun rights.

Thank you for your continued vigilance and support.