Well, that didn’t go as she planned.

In conduct unbecoming of a sitting member of Congress, Stevens came unhinged and shouted down her pro-gun constituents who dared to oppose her support for radical gun control proposals like Universal Gun Registration. 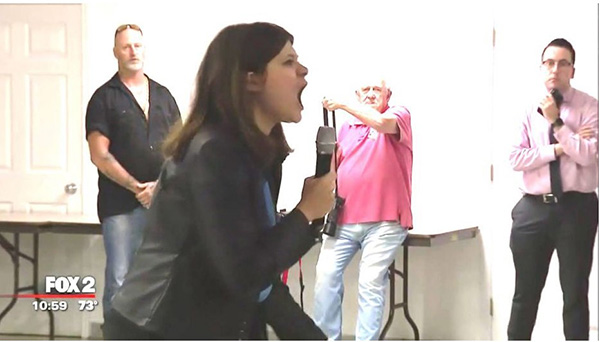 Tempers flared as Democrat Congresswoman Haley Stevens shouts at pro-gun Michiganders for daring to oppose her support of Universal Gun Registration.
I don’t know exactly what Stevens was thinking in holding a gun control town hall at a gun club.

Of course pro-gun Michiganders were going to attend this event, but apparently she and her allies were hoping to pull a fast one.

According to Fox 2 Detroit, the organizers of the event “were not transparent” about the nature of the town hall and “many members [of the club] did not find out until recently that it would be about guns and gun control.”

So apparently, she was hoping to have the perfect optics of pushing gun control at a gun club where only people who agreed with her radical position would show up…

But pro-gun folks in the 11th Congressional District didn’t let her off the hook.

At every attempt to push “common sense” gun control, Stevens met stiff resistance from the crowd.

Also in attendance were Michigan House Democratic Leader Christine Greig and “Red Flag” bill sponsor State Rep. Robert Wittenberg who were both also met with stiff resistance when attempting to push “common sense” gun control in a crowd that was overwhelmingly pro-gun.

Wittenberg laughingly attempted to claim support for the Second Amendment while peddling his “Red Flag” legislation which he admitted publicly at the event that it’s about gun confiscation.

Pro-gun Michiganders let him have it for feigning support for gun rights while also supporting one of the most radical gun control proposals in history.

I agree with Meshawn Maddock, chair of the 11thCongressional District Republican Committee, who said in a statement to Stevens that “you’ve got a lot of nerve holding an anti-gun rally in the heart of gun-country.”

Well, Congresswoman Stevens may have had the nerve when first organizing the event thinking that only gun control supporters would be in attendance, but quickly lost it when she realized the people were against her.

Stevens is a first-term Congresswoman in a seat previously held by a Republican that President Trump won by five percentage points in 2016.

Coming out so boldly in favor of some of the most radical gun control measures proposed in history is certainly an interesting tactic for a Democratic Congresswoman sitting in what is clearly a swing district.

But she isn’t alone…

There are numerous Democratic lawmakers (and frankly some Republicans) here in Michigan in the State House, State Senate and Congress who are sitting in districts that swung their way during the 2018 elections, but are still very much in play and still very much pro-gun.

Our job here at Great Lakes Gun Rights is to expose anti-gunners like Haley Stevens so that you and Michiganders across the state can make it clear to them there will be a high political cost for supporting gun control.

The only way we can do this is with the support of our members and supporters.

So please consider chipping in $30 or even $10 to help us grow our ranks ahead of the important 2020 elections.

Thank you for your continued support and activism!