Unhinged Radicals at the Capitol

Did you see it?

If you were in Lansing on September 10th for the 2019 Second Amendment March and happened to be in the House Office Building to meet with your State Representative, there’s a good chance you saw this sign. 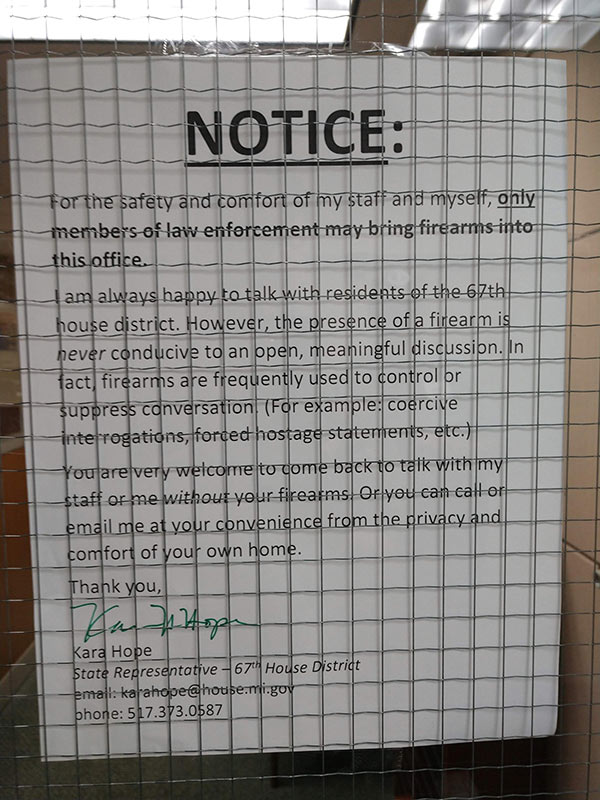 This sign was hanging on the office door of Democrat State Rep. Kara Hope of Michigan’s 67th House District, prohibiting her constituents from visiting her if they happen to be practicing their Second Amendment rights.

While this sign is not all that surprising to see on the door of a known anti-gun Democrat (frankly, I’m surprised to not see more offices with it), it appears that State Rep. Hope violated state law in restricting those legally carrying a firearm from visiting her office.

According to the Detroit News, Republican Speaker of the House Lee Chatfield sent a letter just Wednesday to Rep. Hope requiring her to take down the sign as it was “not only unauthorized but potentially unlawful.”

In prohibiting individuals who happen to be legally carrying under state law from entering her office, not only was Hope infringing on their right to keep and bear arms and banning the carry of firearms where bans are not authorized. . .

. . .but she was also effectively violating their right to petition their government as protected by the First Amendment of the U.S. Constitution and Article 1, Section 3 of the Michigan Constitution.

It’s amazing the lengths some politicians will go to avoid having to hear voices of dissent.

This on top of Democrat U.S Congresswoman Haley Stevens not being transparent about the true intent of her gun control town hall in Commerce Township and then shouting down her pro-gun constituents for daring to call out her support for radical gun control on Tuesday night.

She is also one of only 19 Democrats to vote against House Bill 4434, apparently believing throwing someone in jail for five years and ruining their lives is reasonable for simply failing to renew their CPL.

What is clear is that large swaths of the Democratic Party are bought and paid for by the Gun Control lobby.

The proposals being introduced by today’s Democrats make the gun control measures of yesterday look tame.

Believing that Michiganders should face a five year felony for having an expired CPL is radical.

Taking a person’s property without proper due process via a “Red Flag” order is radical.

Banning entire classes of firearms based solely on cosmetic features is radical.

Yet these are the new standards by which Democrat politicians measure their success.

From Governor Whitmer to Attorney General Dana Nessel, to U.S. Congresswomen Rashida Tlaib and Haley Stevens, all the way down to State Representatives Kara Hope and Robert Wittenberg.

They are all in a race to out gun grab each other.

This isn’t about stopping “gun violence,” but about making it as difficult as possible for law-abiding citizens to practice their Second Amendment rights and carry on in Michigan’s long history of firearm ownership.

It’s also about shutting down any form of opposition to their radical views, either through signs, shaming, or shouting.

If we don’t expose these politicians and their radical agendas now, they’ll continue to skate by without feeling the heat from their constituents for holding such radical views.

If they don’t hear from you and the rest of their pro-gun constituents, they may wrongly believe they are representing you in their push for gun control.

Here at Great Lakes Gun Rights, we take seriously our responsibility to inform pro-gun Michiganders of the threats our gun rights face and who is responsible for those threats.

But in order for us to be more effective in holding anti-gun politicians’ feet to the fire, we must continue bringing more patriots into the fight.

Then please share this article to with your pro-gun friends and family members so they know what’s at stake.

You and I cannot afford to be underprepared with unhinged anti-gun radicals in elected office both in Lansing and Washington, D.C.

So please do all you can to help Great Lakes Gun Rights have the resources needed to continue exposing these radicals.