That is how much cash the gun control lobby is throwing into Michigan to re-elect Governor Gretchen Whitmer and to fill the State Legislature with anti-gun Democrat majorities.

And if they get their way, we’ll be seeing a lot more pictures of Governor Whitmer and her pal and Founder of Moms Demand Action Shannon Watts as they look to further criminalize the ownership of firearms in Michigan. 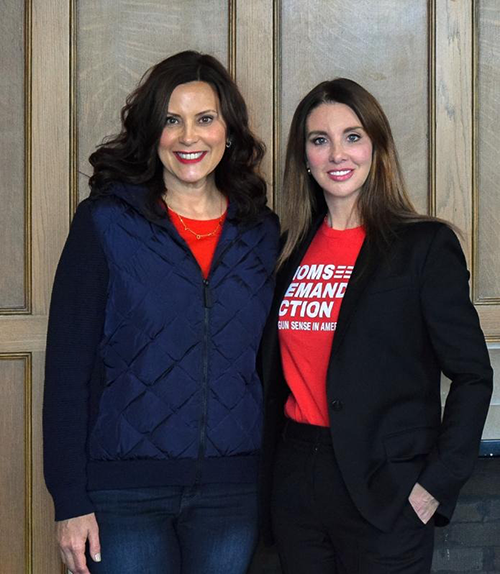 That’s because she isn’t talking about those issues in her own campaign ads or even on her campaign website.

Heck, Moms Demand Action isn’t even bothering to stay focused on their hobby horse of civilian disarmament, finding themselves wandering into the abortion debate, further proving that they are just a tentacle of the Leftist Leviathan.

Make no mistake, Gretchen Whitmer is an enemy of your right to keep and bear arms.

She wouldn’t hesitate for a moment to sign virtually every anti-gun restriction imaginable if Democrats took full control and sent it to her desk, especially if she returns for a second term and never has to face the voters again.

Her campaign has tried their best to bill Whitmer as some kind of moderate, but it can’t hide the fact that she voted against ending Michigan’s ridiculous “duty to retreat” back in 2006, which effectively gave armed criminals more rights than law-abiding citizens who were forced to flee before they could defend themselves during a home invasion.

Then Democrat Governor Jennifer Granholm signed the bill to repeal “duty to retreat” (HB 5153) after it overwhelmingly passed the State Legislature with bi-partisan support.

Whitmer was in the extreme minority with her vote against this commonsense legislation.

Let us also not forget that Governor Whitmer bragged that she shut down gun stores in the midst of her pandemic lockdowns while chatting with Shannon Watts back in August of 2020, when in reality she didn’t. It was an outright lie.

While there was much confusion caused by Whitmer’s draconian lockdowns about the status of gun stores, she never publicly nor directly targeted gun stores in her gubernatorial edicts.

There’s so much at stake in this election year and it is crucial for pro-gun Michiganders be reminded of Whitmer’s hostility towards the Second Amendment.

You can help by sharing this with your like-minded friends and family members.

Then please consider chipping in $30 or even $10 to help Great Lakes Gun Rights keep up the fight for our right to keep and bear arms.

Thank you for your continued support and activism.