The Gun Control Lobby wants to repeat their success in Virginia and Colorado and pass a long list of gun control measures in Michigan.

To accomplish this, Bloomberg-backed groups like “Everytown for Gun Control” are pouring money into the state to buy control of the Michigan House.

That’s why Great Lakes Gun Rights ran a Primary Accountability Program in 12 key State House Districts during the Republican primaries to get candidates on record before they win the nomination and expose those who held anti-gun views.

Here is the good news.

In ten out of the twelve races that we targeted with our hard-hitting Accountability Program, the winning candidate returned their Great Lakes Gun Rights Candidate Survey 100% pro-gun!

This means Michigan gun owners can be more confident going into the general election that they will have pro-gun representation in Lansing.

We also deployed thousands of phone calls and emails, encouraging patriots to keep pressure on candidates to go on record in full support of the right to keep and bear arms.

Piled on to that was an onslaught of targeted social media ads that called on politicians to come clean on their position on the Second Amendment.

The message was clear: stand for gun rights or face the political consequences.

With so much at stake this election year, it’s crucial for gun owners to have a strong voice to carry this message all the way to Lansing.

With your support, GLGR successfully mobilized gun owners to put pressure on candidates in the primaries to pledge their full support for gun rights.

Here are some stand-out races from last week:

Carra returned his Great Lakes Gun Rights Candidate Survey 100% pro-gun and, thanks to GLGR supporters, EVERY candidate in this primary went on the record as 100% pro-gun.

This year, gun owners said “no more” to compromises on their rights.

Chase Turner, the only candidate to return his GLGR Candidate Survey 100% pro-gun in this race, won with 62% of the vote.

In House District 41, gun owners were faced with the prospect of an anti-gun Republican facing off against the current anti-gun Democrat incumbent State Rep. Padma Kuppa.

Evan Agnello, one of the candidates in HD 41, openly opposed Constitutional Carry, voiced his support for laws and regulations restricting the gun rights of law-abiding Michigan foster parents, and supported dangerous “Gun-Free” zones.

In response to his anti-gun survey responses, GLGR called on pro-gun Michiganders in the district to encourage Agnello to reverse course and to fully support the Second Amendment.

After several rounds of mail, phone calls, and social media ads, it was clear that Agnello was an unrepentant supporter of gun control.

Great Lakes Gun Rights PAC then swung into action to make it clear that Agnello was essentially no different than Rep. Kuppa. 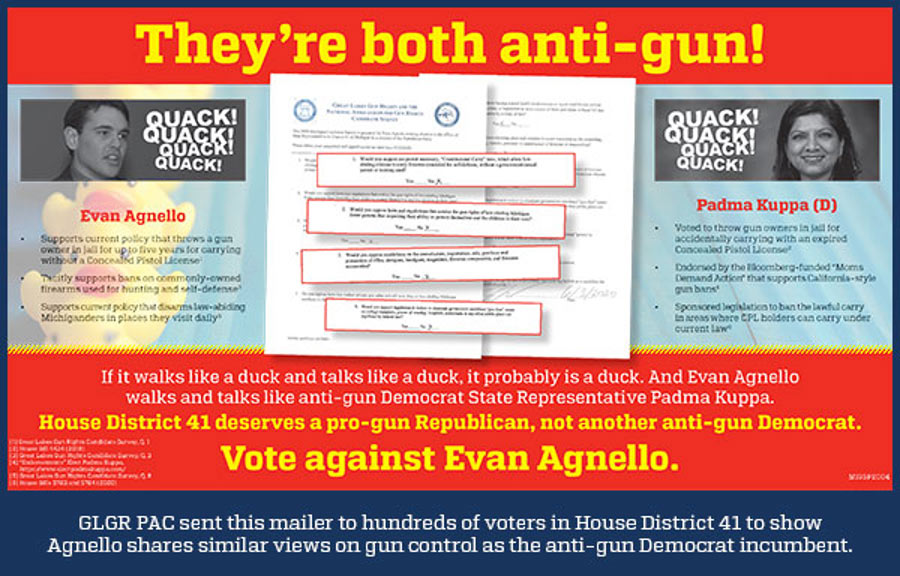 So on Tuesday, August 4th, Evan Agnello went down in defeat to his opponent Andrew Sosnoski by a vote of 51 to 48 percent.

Sosnoski now goes on to the general to face Rep. Kuppa with her abhorrent anti-gun record, giving gun owners a clear distinction between the candidates and a great opportunity to hold her feet to the fire over her support for gun control.

The success in the primaries sets gun owners up for the battle against the Michigan Gun Control Lobby’s deep pockets in the general election.

Great Lakes Gun Rights is gearing up for the fall elections, where we will be actively reporting to pro-gun Michiganders the anti-gun records of nearly a dozen Democrat State Representatives in battleground districts across the state.

You see, our program works best where there is likely to be a close election.

Regardless of the outcome, making sure the voices of gun owners is heard loud-and-clear in these races is key to defending our right to keep and bear arms in Lansing.

But we’ve got our work cut out for us.

With Bloomberg and Nancy Pelosi funneling campaign cash into Michigan, it is an uphill battle against the deep pockets of the radical left.

As we look ahead to November, gun owners can be confident that Great Lake Gun Rights will continue to fight — and win — in the battle for gun freedom in Michigan.

But I am going to need your help if we are going to secure Michigan’s rights for ourselves and our children.

I cannot stress enough how important it is for pro-gun Michiganders to stand up once again for the Second Amendment and take action NOW.

We must stay vigilant if we have any chance of winning back our rights.