“She’ll take all your guns away”

Last night, Governor Gretchen Whitmer was taken to task for her long record of anti-gun animus and support for radical gun control measures such as gun bans, registration, and even outright confiscation.

Republican challenger Tudor Dixon said it best about Whitmer: “She’ll take all your guns away”

Whitmer has said as much during her time as Governor.

Whitmer’s called the most popular firearm in America, the AR-15, a “weapon of mass destruction” that should be banned.

Whitmer supports universal background checks, better known as universal gun registration which gives the government a record of every single firearm you own and requires you to get government permission before loaning a hunting rifle to a buddy or handing down a family heirloom to your son or daughter.

Whitmer supports “Red Flag” gun confiscation laws that allow for legally-owned firearms to be confiscated without due process, putting both gun owners and our law enforcement officers at risk.

Not only that, but she’s also called for dangerous “lock up your safety” laws that require your guns to be locked up separate from ammo, rendering them useless during a home invasion.

But then again, Whitmer proved that she wants you to go hide and wait for the cops to arrive (that she supports defunding) instead of defending yourself when she voted against ending Michigan’s “duty to retreat” law.

Time and again, Governor Whitmer has tried to bill herself as some kind of moderate on gun control, but her record tells a completely different story. Why else would the gun control lobby be throwing in $2.3 million to ensure her re-election?

Make no mistake, if Democrats take total control in Lansing with Whitmer still in the Governor’s mansion, they won’t hesitate to trample all over our Second Amendment rights.

The good news is that last night Republican gubernatorial candidate Tudor Dixon was a perfect contrast to Whitmer.

Not only has Dixon returned her Great Lakes Gun Rights candidate survey 100% pro-gun, but she’s also come out publicly on multiple occasions saying that she supports Constitutional Carry for Michigan.

Dixon also supports ending dangerous “sitting duck zones,” especially at our schools where our children are currently only protected by a useless “gun free zone” sign, thanks to the inaction of Governor Whitmer.

It was a breath of fresh air to see a Republican candidate actually stand their ground on the right to keep and bear arms in a debate, when so many will run from the issue. 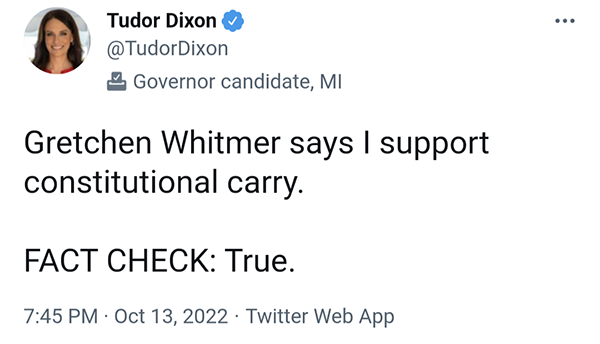 If you have a free moment, go send Tudor Dixon’s campaign a thank you note for her taking a bold stance in support of the Second Amendment and encourage her to keep calling out Whitmer for her assault on our gun rights.

Click here to send a quick message to Tudor Dixon thanking her for her steadfast support of the Second Amendment.

It is crucial for Governor Whitmer and her Democrat allies in the Legislature to be exposed for her radical anti-gun agenda.

Politicians like Whitmer being exposed for the gun grabbers that they really are is crucial to the future of our right to keep and bear arms here in Michigan.

Buckle up, it’s going to be an interesting few weeks as we close in on the November 8th election.