Kudos to all those who came out in support of HB 4770-4774 and testified on behalf of this important legislation.

While I was not able to attend due to a previously scheduled obligation, GLGR staff was on hand to observe the hearing.

It was crucial for pro-gun Michiganders to show up in force, especially with Bloomberg-funded MDA activists in the audience. 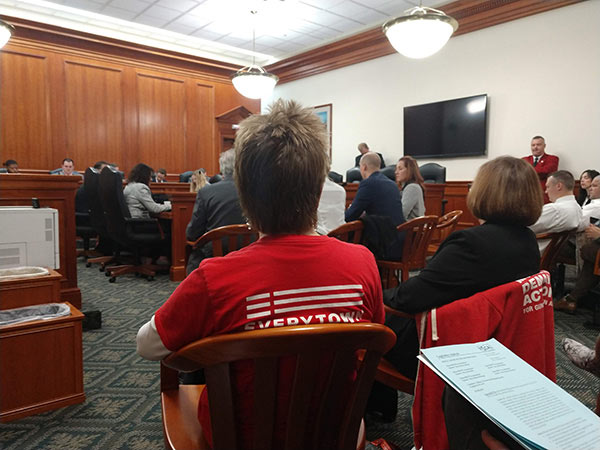 The Constitutional Carry bill sponsors hit it out of the park with their testimonies.

Lead sponsor State Representative Steve Johnson (R-HD 72) in his testimony rightly pointed out “Michigan firearm laws are very tough” in that they punish gun owners with a harsh five year felony for carrying a concealed pistol without a CPL.

…making the point that Constitutional Carry would make the legal carry of firearms safer and put gun owners less at risk of becoming felons under Michigan’s draconian gun control regulations.

Next week, pro-gun Michiganders will have another opportunity to show their support of HB 4770-4774, and I will be there to testify on behalf of Great Lakes Gun Rights members like you.

GLGR plans to cover the fact that carrying concealed without a CPL is essentially a victimless crime in upcoming testimony.

The only victim of carrying concealed without a CPL is the State of Michigan who loses out on the profit they make on selling back constitutional rights.

Of course, if a Michigander doesn’t get a CPL and carries concealed, lives can be ruined with a five year felony and thousands of dollars in legal fees.

That needs to change, and that is why Great Lakes Gun Rights is continuing in the push to get a recorded vote on Constitutional Carry on the House floor ahead of the 2020 elections.

It’s crucial gun owners know where their State Representatives stand on this important legislation before they start asking for your support.

And with this vote, they will be forced to either stand with gun-owning Michiganders or with out-of-state gun control lobbyists who are pushing to keep Michigan’s gun laws in the dark ages.

If you haven’t yet, show your support for Constitutional Carry by signing your petition TODAY!

Then forward this email to pro-gun family and friends to get them in the fight.

With your signed petition, please consider chipping in $30 or $10 to help us bring more pro-gun Michiganders into the fight for Constitutional Carry.

Thank you again for all of you who were able to show up yesterday, and I’ll plan on seeing you next week if you are able to come!

Details to follow on time and location of the next hearing.