Are you kidding me?

A week before the Republican Primary on August 2nd where Michiganders will choose who will run against Democrat incumbent Governor Gretchen Whitmer, Kevin Rinke appears to have just revealed his real opinion of gun owners and the Second Amendment…

In an interview posted Friday on Twitter, Rinke is shown chumming it up with Charlie LeDuff who asks Rinke his thoughts on expanding the background check requirement for private sales on pistols to ALL firearm purchases in Michigan.

Rinke responded saying that “I certainly don’t see it as a huge infringement” to force ALL firearm purchases to be pre-approved by the government and even agreeing with LeDuff when he calls private sales a “loophole.”

Excuse me, Mr. Rinke, but freedom is not a loophole and it certainly isn’t a loophole to not be threatened with jail time for privately selling a shotgun or hunting rifle to a family member or close friend.

You can watch the interview yourself by clicking here.

Now, it’s possible that he just got caught up in the glitter of the moment, but when Rinke attacks gun-owning Michiganders for not supporting this radical expansion of gun control for Michigan, he denigrates gun owners as the “far right.”

Forcing every would-be firearms purchasers to go through the background check system gives the government a record of every firearm that you own.

And despite the government’s claims that they don’t keep these records, we’ve seen time and again evidence that they do.

And as we’ve seen in other nations (and, gasp, even in California), government agents eventually use these records for outright confiscation.

What’s more startling is that Kevin Rinke returned his Great Lakes Gun Rights candidate survey indicating that he would oppose the outlawing of private sales in Michigan. 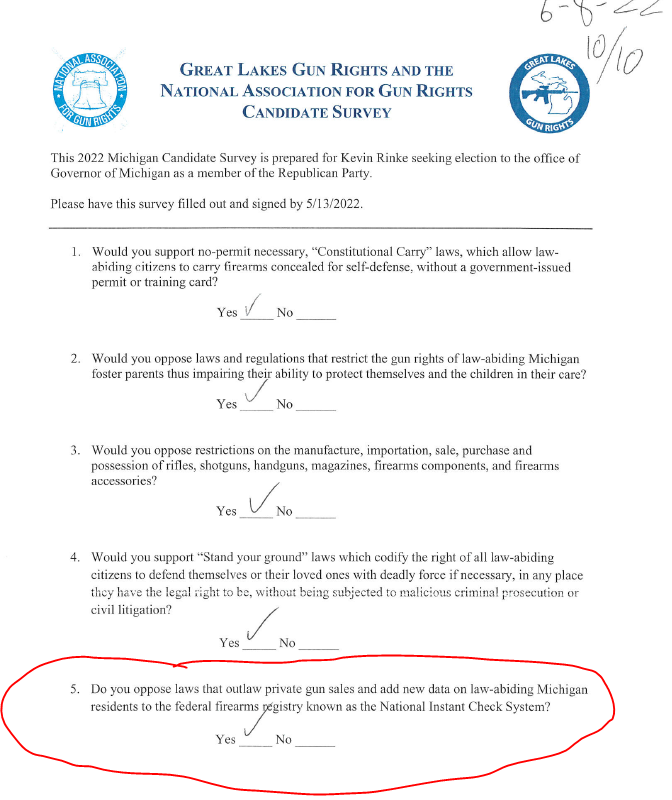 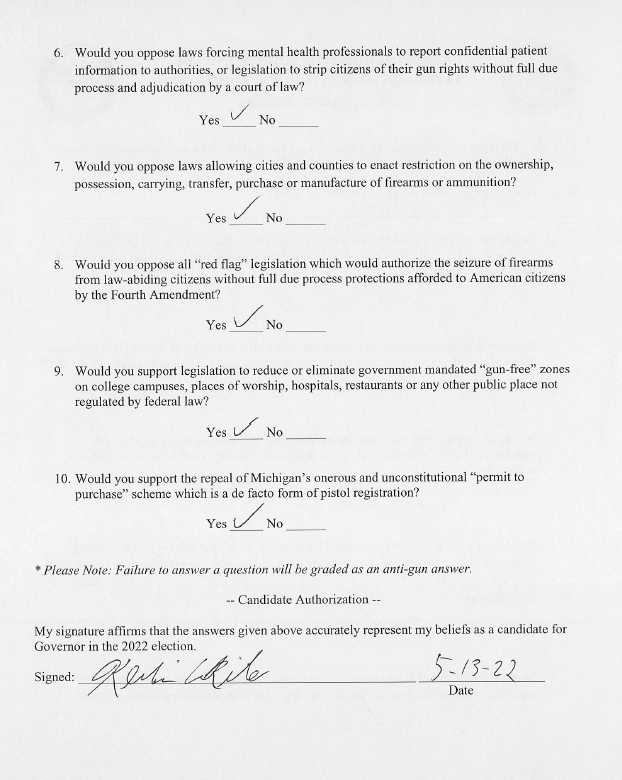 Does Kevin Rinke stand by his Great Lakes Gun Rights candidate survey responses (and virtually every gun rights organization in America) or does he stand with Michael Bloomberg, Gretchen Whitmer and the gun control lobby in supporting a ban on private sales in Michigan?

Go leave a comment on Kevin Rinke’s Facebook or Twitter page (or send him a message) and urge him to reject more gun control for Michigan.

With only a week before the primary on August 2nd, time is of the essence, so please contact him ASAP.

Politicians are most susceptible to grassroots pressure when they are looking for your support and Rinke needs to hear from you.

The good news is that while Kevin Rinke has made this unforced error by revealing his true views of the Second Amendment, the other four candidates have all returned their Great Lakes Gun Rights candidate surveys 100% pro-gun (and have not contradicted themselves in the media like Rinke).

Please be sure to thank Tudor Dixon, Ryan Kelley, Garrett Soldano and Ralph ReBandt for pledging to stand up for your gun rights and urge them to stay strong.

Thank you for your continued activism and quick response to this call to action!