Constitutional Carry Out of First Committee!

Constitutional Carry (HB 4770-4774) was voted out of the House Military, Veterans, and Homeland Security Committee yesterday!

This legislation passed with all five Republicans on the committee voting “Aye,” three Democrats abstaining, and freshman Democrat State Rep. Mari Manoogian of the 40thHouse District being the lone “No” vote.

Unfortunately, Rep. Chirkun broke his pledge to vote for this important pro-gun legislation, as he not only is a co-sponsor of HB 4770, but also had previously signed his Great Lakes Gun Rights survey indicating his support for Constitutional Carry.

The theme of today’s hearing, as it was last week, is that this legislative bill package is as much about gun rights as it is about criminal justice.

Right now, Michigan’s gun control laws lead to far too many otherwise law-abiding gun owners becoming felons for carrying concealed, or in their car, without a CPL.

As I’ve mentioned before, Michigan’s life-shattering five year felony is less forgiving than California, where carrying without a permit is only a misdemeanor.

Here at Great Lakes Gun Rights, we don’t believe there should be any penalty for carrying concealed without a CPL, as it is a victimless crime, and state law shouldn’t treat open carry any differently than it treats concealed carry.

Punishing someone without a CPL with a five year felony is insane when you consider that violent crimes involving physical injury are treated less severely.

As I brought up in my testimony, assaulting a police officer to the point that he/she requires medical attention is punished less severely than the victimless crime of carrying concealed without a CPL. 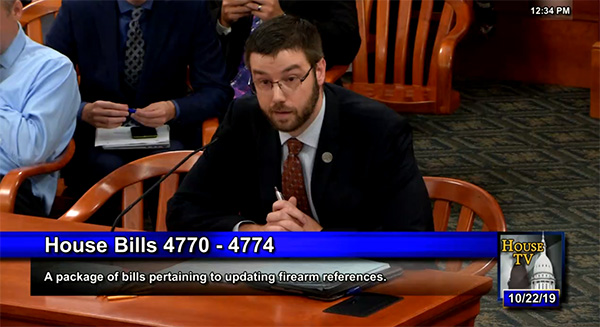 With this committee vote, Michiganders are one step closer to seeing a recorded vote on the floor of the Michigan House of Representatives.

Help GLGR build upon this success by signing your petition in support of Constitutional Carry today!

Please also forward this link to your pro-gun family and friends to get them in the fight as well.

GLGR Staff will deliver your petitions to your State Representatives in the coming months to show them just how much support there is for this common sense legislation.

The next stop for HB 4770-4774 is the House Judiciary Committee, chaired by Republican State Rep. Graham Filler of the 93rd House District.

GLGR is calling on him to give this legislation the quick hearing and a vote that it deserves.

After all, criminal justice reform has been a major talking point in Lansing, especially with divided government.

Both Democrats and Republicans are championing efforts to lessen the criminal penalties on all sorts of activities.

This should, and must, be one of those issues.

Constitutional Carry would restore a fundamental right to law-abiding citizens in Michigan by no longer treating them as criminals for how they decide to carry.

Throwing gun owners in jail for up to five years and making them a felon robs them of their rights and their future.

I think Republicans and Democrats can agree — making someone a felon for a victimless crime is bad policy that should be thrown to the dust bin of history.

But there will be those radicals who agree wholeheartedly with “Moms Demand Action” that it is completely reasonable to charge a Michigander with a felony for carrying concealed without a CPL.

It’s nice to think she is in the minority, but there is only one way to find out for sure and that’s by getting a recorded vote on the House floor for HB 4770-4774.

Help build up the pressure to get this vote by signing your Constitutional Carry petition today.

Then please consider chipping in $50 or even $15 to help us get more pro-gun Michiganders into the fight.

Every little bit helps us grow our movement and have a louder voice in support of the right to keep and bear arms.

And only with your support will we achieve our ultimate goal of making Constitutional Carry law in Michigan.

Thank you in advance for your support and activism!