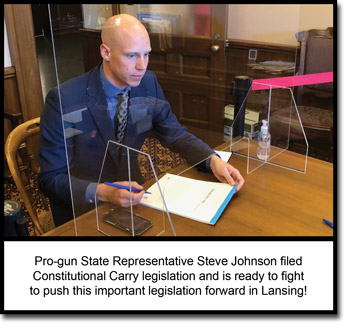 House Bills 4863-4868 will officially be introduced and assigned to committee on Tuesday.

And it already has seven co-sponsors!

As you know, Constitutional Carry would simply restore the right of law-abiding citizens in Michigan to carry a pistol to protect themselves, whether openly or concealed, without having to beg the government for permission or pay expensive fees.

So please sign your petition encouraging your lawmakers to support Constitutional Carry TODAY!

After all, no CPL is required to openly carry a pistol here in Michigan, so the permit amounts to nothing more than a tax on the right to carry.

And if you don’t pay the tax, you can be thrown in jail for up to five years for even the smallest infraction.

No one should be thrown in jail for practicing a fundamental right, especially when no permit is required to openly carry a pistol in Michigan!

Treating open and concealed carry different under the law is ridiculous, and must come to an end.

This is a perfect example of why Michigan needs to pass Constitutional Carry.

If you agree, please sign your Constitutional Carry petition IMMEDIATELY!

House Bills 4863-4868 would also restore the right to carry a loaded pistol in your vehicle without having to obtain a CPL, a practice that is already legal (in some form) in over half the country.

The CPL will remain intact so that Michiganders can obtain it for the purposes of interstate reciprocity, it would simply become optional.

The basic principle with Constitutional Carry is that no law-abiding citizen should face the threat of jail time for deciding to carry their pistol concealed instead of openly displaying it.

Law-abiding citizens in Michigan should be restored the choice of how they carry, and Constitutional Carry would do just that!

Already 20 states have Constitutional Carry on the books with Utah, Montana, Tennessee, and Iowa passing it into law just this year!

If we want Michigan to join the growing ranks, you and I have to stay on offense even through the years with Gretchen Whitmer as Governor.

No other constitutional right has these required hoops that you must jump through, except for the Second Amendment.

That’s why Great Lakes Gun Rights is so committed to fighting for Constitutional Carry.

Your signed petition will give Great Lakes Gun Rights the ammunition needed to help make Constitutional Carry a reality in Michigan.

So please sign your petition encouraging your lawmakers to support Constitutional Carry TODAY!

Carrying a pistol for self-defense should require no government approval, period.

If you can legally possess a pistol, you should be able to carry it how you see fit without paying excessive fees, getting fingerprinted like a common criminal, and waiting on your paperwork to be approved.

This is why Great Lakes Gun Rights continues to champion Michigan repealing the permit requirement by becoming a Constitutional Carry state.

During these uncertain times, we need to show politicians in Lansing we mean business.

That is why I need you to sign your petition for Constitutional Carry in Michigan today.

Great Lakes Gun rights is committed to continuing the fight for your gun rights during this time of crisis.

Your ability to defend yourself and your loved ones will never be more important than it is right now.

Please join your fellow patriots and sign your Constitutional Carry petition and consider giving your most generous contribution today.

Thank you for your support. I know you won’t let me down.