In defiance of state pre-emption, the City of Eastpointe is rolling out a new ordinance to punish the victims of crime.

On Thursday, the Eastpointe Police and Fire Department announced on Facebook that they are going to punish citizens for having their guns stolen out of their cars, if the car was unlocked. 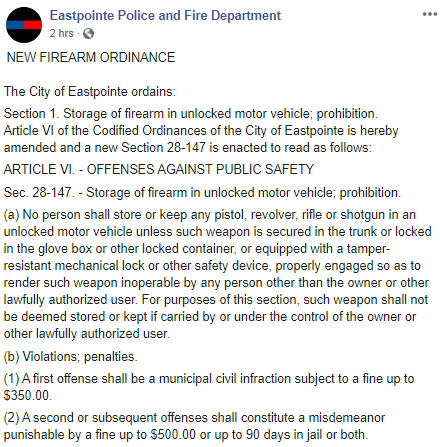 Besides the ordinance being a violation of state law, as municipalities do not have the authority to pass such ordinances, this ordinance is primed to violate both the 4th and 5th Amendments of the U.S. Constitution.

The only way this ordinance is enforceable, if it is not struck down for violating state law, would be for the victims to be required to incriminate themselves by admitting they left their car unlocked.

This is a violation of the 5th Amendment as citizens “cannot be compelled to be a witness against himself.”

Not only that, where is the incentive for any victim to report a crime if they are going to face criminal charges?

The other option is for city officials to just go check everyone’s cars to see if they are locked and have guns in them, which of course is a 4th Amendment violation.

When pressed on this issue on Facebook, the department responded that “we are not going to check on any vehicle to make certain it is locked…”

Well, that’s a relief, but it begs the question: How do they expect to enforce this illegal ordinance when they are seeking to punish the very people victimized by what they are trying to stop?

This ordinance appears to be not well thought out and could cost the taxpayers of Eastpointe mightily in legal fees for an ordinance that is in violation of state law to begin with.

Without questioning the motives of the officials pushing this new ordinance, as well-intentioned as they might be, it will not accomplish the desired result.

Isn’t this the truth of all gun control?

But instead of learning the lesson that gun control doesn’t work, policy makers double down and push for a little more gun control, claiming we are just one new law from utopia.

But that’s not how reality works.

Criminals ignore the laws. That’s why they are called criminals.

Michigan gun laws are a prime example of this with harsh penalties for even the smallest infraction.

Just like every other gun control measure, the Eastpointe ordinance will fail because it will only effect (and punish) otherwise law-abiding citizens.

Here’s hoping the City of Eastpointe will save their residents’ tax dollars by repealing this ordinance before they find themselves in a court battle for violating state law.

And here’s hoping the they realize that punishing the victims of crime is no way to deter crime, but only guarantees they’ll never have a reported theft in their city again for good people being afraid of being prosecuted for doing the right thing.

Great Lakes Gun Rights exists to expose and fight against gun control measures like this, whether it is at the State Capitol or in Loveland.

If you know of a violation happening where you live, please reach out to the staff of GLGR.

As a reminder, GLGR is entirely dependent upon the voluntary contributions of pro-gun Michiganders to keep up the fight for the right to keep and bear arms.

Will you chip in $30 or even $10 to help GLGR have the resources we need to keep fighting?

Thank you in advance for your support and activism!